With Valentine's Day and affairs of the heart upon us, correspondent David Culver asked some of the residents of Daylesford Crossing to reflect on how they first met their spouses. Their answers appeared in the Mainline Media News.

Bill Knepshield – I met Silver when I was a freshman at the University of Alabama in 1952. I was driving through campus and was stopped at a red light, and Silver came running up to me and said, “You’re from Pennsylvania!” (I had a Pennsylvania license plate on my car, and it turned out her home was in Pennsylvania.) Well, my response was, “So what?” Actually, I thought that first meeting was kind of exciting; two people from the same state meeting at a school hundreds of miles away. You don’t often meet a girl that way.
We talked for a little bit. In the weeks after we first met, we would meet near the school library for coffee. And that’s how it all began. We dated for the next four years. But, because Silver was in pre-med and had labs at night and my engineering classes were pretty rigorous, we didn’t have much time to date. We mostly got together during the day. Of course, Alabama football was big. Bart Starr (former Green Bay Packers’ great quarterback) was the Alabama quarterback when we were there, and I graduated one year before Bear Bryant arrived.

After we graduated, I became an aeronautical engineer and was working at Langley Air Force Base in Virginia. Silver moved back to Pennsylvania with her parents in New Bloomfield just outside of Harrisburg – and then eventually to Carlisle. Silver would come visit me at Langley every once in a while. It wasn’t until after college that we decided to get married. We had a big wedding in the back yard of Silver’s parents’ house in Carlisle.

Grace Lahiff – I met my husband Thomas on New Year’s Day 1946 – right after the end of World War II – and he was home from 9 months overseas in the military. He was stationed at the U.S. Merchant Marine Academy in Kings Point, New York. I was a student nurse at New Jersey City University. Thomas was a friend of my best girlfriend’s fiancée, and we went out on a blind date to dinner in New York City. We took the 99 bus to get there.

Thomas was in uniform and he looked really nice. We didn’t see much of each other after that first date, because he only got weekends off. A typical date was eating out at a restaurant in New York City or going to a ball game. My favorite team was the Brooklyn Dodgers.
Education was very important to Thomas and his family, so we waited until Thomas finished school to get married. He proposed to me during a carriage ride in Central Park in New York City. Our favorite song was “It Had to Be You,” and those words are inscribed inside my engagement ring.

Thomas asked my father for permission to marry me on his birthday because Thomas thought Dad wouldn’t say no on his birthday.
We married September 11, 1948, and we were married for 65 years and had five children. When we first got married, I woke up every morning and thought, “I can’t believe I’m so happy.”

Dolores McFadden – I met Francis (nicknamed Mac) at a dance at Holy Cross Catholic Church in Springfield Delaware County around 1958. I had graduated from high school and was preparing to enroll at Drexel. Mac was in the military; he was dressed in uniform, and I thought he was very handsome. He asked me to dance, and that was it. After the dance we saw each other a few times before he had to return to his base at Ft. Gordon in Georgia, and we started writing each other. When he was sent to Korea we wrote each other every single day.

When he came back to the United State around 1960, we knew we wanted to get married. Mac didn’t ask my father for permission to marry me. In fact, I don’t even recall if he asked me to marry him. It wasn’t necessary. We both knew. I told my mother even before Mac and I agreed to get married, “Mom, this is the man for me.”
I had only gone to Drexel for one year, and Mac and I got married when I was two months shy of 21 years old. Mac was two years older than me. Got married at St. Laurence Catholic Church in Upper Darby, where we lived after we got married. We had four children there and then two more after we moved to King of Prussia.
I love Mac more today than the day I married him. He’s a sweet man; the sweetest man I’ve ever known. We’ve had a beautiful life together. It’s a love story. It really is.

Pat Free – I met Mike on a Sunday in 1947 in Ardmore, Oklahoma. I was 17 and was singing in a Methodist church choir with my cousin when I saw a stranger come into the church. My cousin must have seen that the stranger caught my eye, and she asked if I’d like her to introduce me to him. (I don’t know how she knew Mike, but she did.) I said, “No, you know I don’t want to get married, now.” I knew marriage would be a lot of work, and I didn’t want to get married just yet. I thought if I met him, I might change my mind. But, when the church service was over, my cousin and I went outside and she introduced me to Mike. He was headed to lunch, and we talked for a few minutes. It turns out he had just moved to Ardmore after serving a field assignment for his employer, an oil company. That night, he took me out on our first date – to a boxing match. We dated for several months, and we pretty quickly knew that we were right for each other. He took me home to meet his family in Greensburg, Pa., that Christmas and we got married the following July.
Two years before we met, Mike was serving in the Navy on a small craft in the South Pacific. His commander told him and the rest of the crew, “None of you is likely to survive this war. We’re planning on invading Japan, and you boys are going in first.” But shortly after, the U.S. dropped the atomic bombs on Hiroshima and Nagasaki. I sometimes think about how it’s not likely Mike would ever have made it back to the U.S. – and we never would have met. 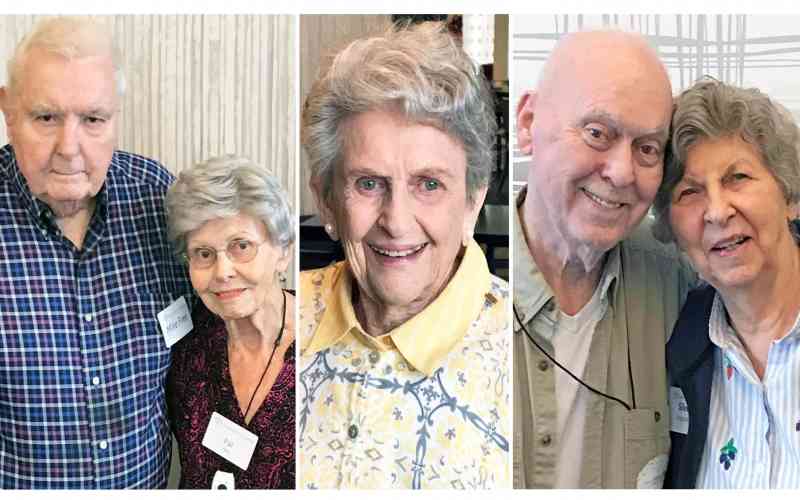